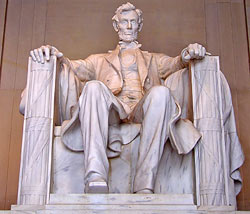 How many of you go to the Memorial Center in Washington, having no clue what it is about? This article wants to give you the main information about it, in order to let you enjoy your visit there.

The Lincoln Monument Association got incorporated by the Congress in March 1867, since it was requested to build a memorial to the slain President, but unfortunately no progress has been made until 1901, when the so-called McMillan Commission chose a West Potomac Park site for the memorial.

Congress, of course, agreed, and they decided to ask the New Yorker architect Henry Bacon to do the works. The construction began on February 12 1914, and Daniel Chester designed the statue, while the Piccirilli Brothers, carved it. The material in which the statue is made is primarily Colorado Yule marble and Indiana limestone.

The statue is 19 feet tall and 19 feet wide and made from 28 marble blocks. The murals, which were painted by Jules Guerin, depicted the most important episodes of Lincoln’s life. They are located above the inscriptions of Lincoln’s Gettysburg Address and his Second Inaugural Address.

Lincoln Memorial is one of more than 380 parks in the National Park System, whose service is related to the special places saved by the American people so that all may experience our heritage.

Do not miss the chance to visit it: it is open daily, except December 25. There are several park rangers who are always available to answer questions, give talks and, of course, provide information.