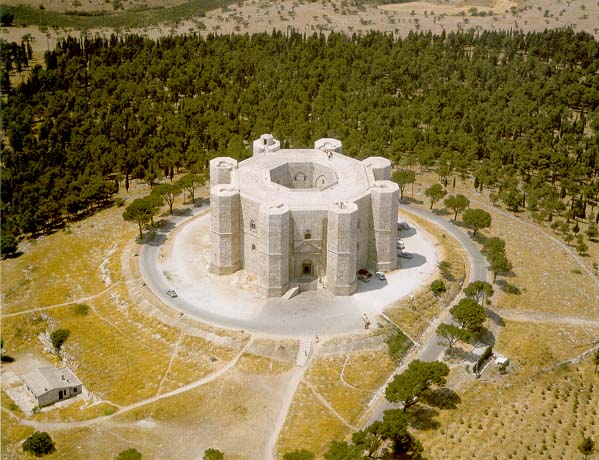 Have you ever felt the impression that you have spent so much time in an Italian region, but you have never explored it? That’s what happens most of the time to Italians too. They think they know a place, but it’s not like that.

If you have the chance to go back to Puglia, go to see the famous 13th century Castel del Monte (literally Castle of the Mount), which is perched up on a hill out in the middle of the Puglian countryside, near Andria, a city famous for its lovely and tasty burrata cheese.

If you are asking yourself why this castle is important, take 1 euro cent coin and turned it back: the monument depicted is the Castel del Monte and it has to be chosen beside other places because it’s one of the World Heritage Sites.

It sits out in the middle of nothing, and the forest surrounding it acts as both a shelter and a camouflage. The castle has an octagon shape that is what really sets it apart from other castles you have probably seen, and the smooth exterior which is unfortunately no longer the original.

The history of the castle is pretty long and convoluted, and you will learn from your local guide or from the guidebook that it’s been vandalized and ransacked repeatedly and was only restored in the last century.

Though there is some ornamentation in some of the castle windows, the spartan exterior doesn’t hide any real signs of life inside. Its original function was protecting people, and it was not an embellishment building.

There was so little life to the structure that the placement of a single statue in the immense inner courtyard had that much more impact. Two people, a soldier and his lady, locked in an embrace. They are Hector and Andromache, and the statue is called  L’Abbraccio di Ettore e Andromaca (literally The Hug between Hector and Andromache).